On April 14, 2004, 3 days after Easter Sunday, Corporal Dunham was manning a checkpoint in Karabilah, Iraq, when an insurgent leapt from his car and began choking Corporal Dunham. A scuffle ensued as two Marines approached to help.

Reportedly, the last words from Corporal Dunham were, "No, No. Watch his hand." Suddenly, the insurgent dropped a grenade. Corporal Dunham took off his Kevlar helmet, dropped to the ground, and covered the explosive as best he could.

The blast seriously wounded all 3 Marines. Eight days later, Corporal Jason L. Dunham died at Bethesda Naval Hospital from wounds he received in the incident. He was 22.

The new destroyer honors Cpl. Jason L. Dunham, an Allegany county native of Scio, and the first Marine awarded the Medal of Honor for Operation Iraqi Freedom. His parents Debra and Daniel Dunham were in Florida for a week of events leading up to the formal commissioning ceremony.

Debra Dunham served as sponsor of the ship named for her late son. The ceremony was highlighted by a time-honored Navy tradition when she gave the first order to "man our ship and bring her to life!

Designated DDG 109, Jason Dunham, the 59th Arleigh Burke-class destroyer, will be able to conduct a variety of operations, from peacetime presence and crisis management to sea control and power projection. The USS Jason Dunham will be capable of fighting air, surface and subsurface battles simultaneously and will contain a myriad of offensive and defensive weapons designed to support maritime warfare in keeping with "A Cooperative Strategy for 21st Century Sea Power." 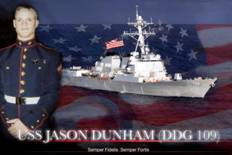 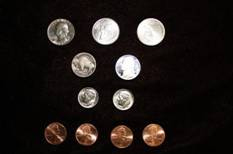 To honor Marine Jason Dunham, the following items are enshrined in the mast of the ship that bears his name. 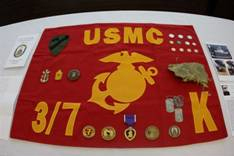 Legend has it that in the times of the ancient Greeks, enough money was placed in the mast to make sure that each of the crew could afford the trip into the afterlife should the ship sink. The U.S. Navy, steeped in customs and traditions, continues the ritual to this day, with symbolic aspects of the ship's heritage forever welded in the iron masts of today's warships.

The coin denominations sum is 109 and represents the ship's hull number.

Whiting Door  is here to provide you with more information and answer any questions.